Snopes.com has a great collection of these tall tales and, even better, they've gone to great lengths to separate the fact from the fiction. We checked out their archives to find some of the most interesting candy-related urban legends. We bet you've heard some of these before, but you might not know the whole story behind them. Bonus points if you can guess which ones are true before you read!

Candy for Cows - According to this legend, people aren't the only ones who "Taste the Rainbow." Are farmers really feeding their animals Skittles?

Rock Star Requests - Is it true that Van Halen doesn't allow any brown M&M's backstage? If they ever come back to Cleveland, we'd have no problem. We could just select whatever colors they do want from our wall of M&M's dispensers.

Who is Baby Ruth? - Frankly, we never worried about it much. As long as we've got those chocolate-covered, peanut, caramel and nougat filled delights within arm's reach, we're happy campers.

Silver Screen Goldmine - Ever wonder why E.T. likes Reese's Pieces so much? (Editor's note: As a child, I was so frightened by E.T. that I have still never watched the film, so I honestly don't know if E.T. even eats the Reese's Pieces.)

Mama Said - How long does it really take to digest a piece of swallowed bubble gum?

Kinda crazy what people come up with, isn't it? Were you shocked by any of these? Tell us which one surprised you the most in the comments! 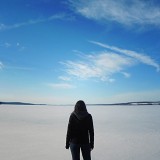 Little Mikey is my favorite! Good to know it doesn’t take seven years to digest bubblegum…phew. Thanks for sharing!